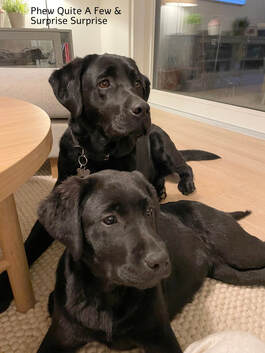 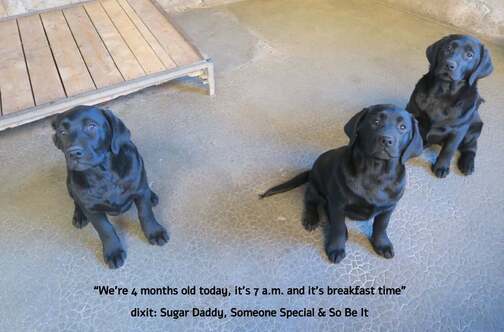 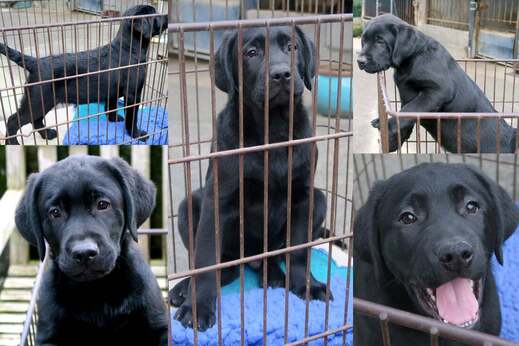 How not to be happy when you organise the last litter of puppies from Charlie - 7 times French Champion till they changed the rules to keep champions from blocking others, Field Trial Champion on the top level, Champion of 7 countries in days when there were 350 Labradors at Interntional shows and over 500 at the Retriever Club annual show. 96 CACIB and Top Dog ALL breeds in France in 1994.
Alas an error where nearly 200 frozen straws from Charlie were kept for the future brought the painful news in 2005 that all the frozen semen had been destroyed. In 2017 I managed to recuperate two inseminations from where they were stocked in Oregon and for which I had never been paid. These precious straws, semen collected in 1997, were shipped to Germany as the rules for entry into France had changed. And Never and O.P.I. were two of the five puppies born from this semen in July 2017.
I chose Meg for the insemination because she's a wonderful mother and clear for all seven DNA tests done on her, she carries yellow and has A/A hips and 0/0 elbows and a lovely personality a will to please and a love of picking up. Also she's 6 generations down from Rocheby Fay of Tintagel Winds. And she's clear for the coat problem.
Inseminated on September 20th, after several check-ups and the addition of hormone capsules to maintain a good level of progesterone - her 6 puppies were born on November 20th. All black was a bit of a surprise. Not a single yellow.
Then Yala had her five by Never 8 days later and I sat for hours watching them all as I stripped paper for their future in their pens. The demand for Charlie's get was great from many countries. He has not been forgotten.
Then they were all "grounded" by 4 weeks' old and started eating and playing. And one day I just sat and stared in horror . . . I could not believe my eyes
. . . . .
​Charlie produced 350 Tintagel Winds puppies with natural matings from 1992 to 2004 when he died. I have not hundreds but thousands of photos - some well known as was/is this poster showing him and his puppies or often just his puppies. With straight, medium tails, pretty well wrapped and horizontal with their backs. NEVER, ever have I seen tails like these, neither from him nor from any other dog I have owned or used since 1977 when I created TINTAGEL WINDS with a strict blueprint. I sat there, my heart beating wildly and erratically and then seized my camera and photographed them with tears running down my face. It was midnight and I felt utterly destroyed. The start of a nightmare.
Obviously there had to have been a problem with identifying the straws, With collection of semen on several dates and in two different places, sent to the United States in 1997, recuperated and sent to Germany in 2017, recuperated and sent to France in 2021 . . . . Straws in Germany (but from which dates ?) had been tested for the DNA identity in 2018 to be sure Never and his litter-mates were truly Charlie's get. I had tested all six babies for their coat at 18 days' old with DDC in the U.S. and so I sent them the DNA identification done in Germany in 2018 . . . but the system is totally different in the U.S. and DDC was unable to check that the DNA identity of Charlie corresponded to the sire of the 6 puppies. Back to square one.
Here I pay an immense hommage to my much loved, respected and admired friend Pr. Alain Fontbonne who, having seen the photos - and as horrified as was I - got in contact with Antagene in France and explained the situation. Thereafter started an incredible ballet of DNA testing for all Charlies straws, those remaining, unused, and the ones used, redoing Never, O.P.I. and Tiffany, doing the puppies again, checking they all carry yellow (wouldn't prove Charlie's the sire but pure black puppies couldn't be his - just one more dot on the 'i').
Antagene were super-efficient and returned the results in shorter time than one might expect, certainly thanks to Alain for that too as he has a professional clout that of course I don't have.
In the meantime, I had cancelled the sales and the puppies grew and I started to become fairly neurotic - seeing things and believing I was seeing things that just weren't there. Until the plain fact arrived with all the evidence accumulated that these six puppies are indeed Charlie's. And the tails started to become more normal.
But the question remains . . . HOW and WHY ? We are still exploring this, Meg was under Progesterone capsules for most of her pregnancy since her level had dropped to under 10ng. other than this, it was uneventful. But the straws were 27 years old and had been manipulated and had travelled a great deal . . . . maybe we'll always be left with conjecture.
Yellow collar, SHOW ME, left for the south west of France on Sunday to join "Freddie" and "Pops" with a definite show career planned for her. I am keeping SO BE IT (green collar) aptly named for my non-future, the end of my passionate breeder's life and the spectre of a future coffin . . . . and Sugar Daddy (royal blue), Spot On (Pink) and the two other girls, (orange and red collars) are now looking for an exciting future - 11 weeks old on saturday.
I'm prepared to discuss them with potential owners, preferably breeders after all the hope, work, patience and expense, they are more than "pets" or "Perhaps Everyone Trying Showing" which, afterall, will make them all PETS !
_____________________________________________________
​31/01/2022
10 Weeks
_____________________________________________________
​20/12/2021
1 month
Growing! 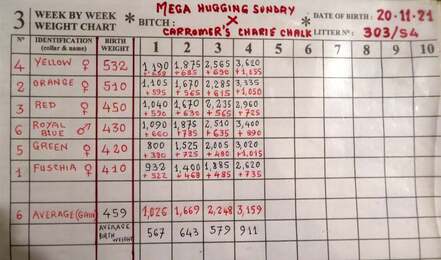 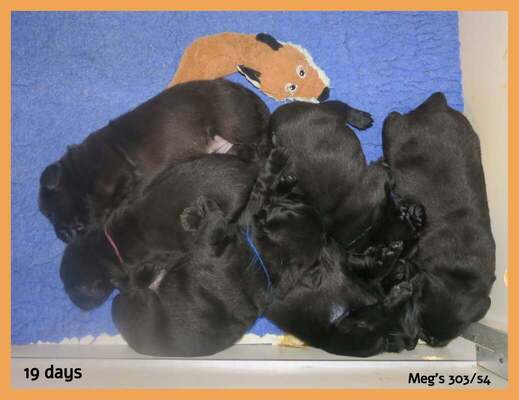 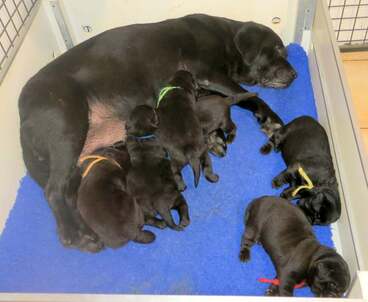 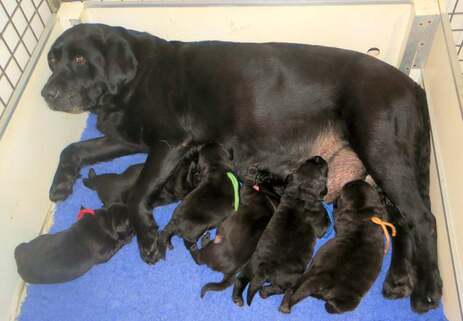 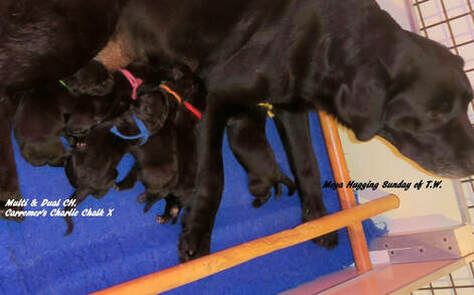 I adore Meg - her expression when I said "no, don't move, I want a photo" with her eyes swivelled round to watch me but like the good girl she is - not moving her head ! 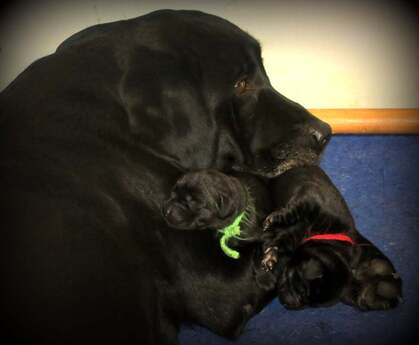 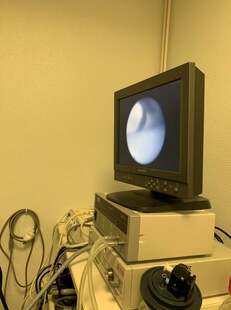