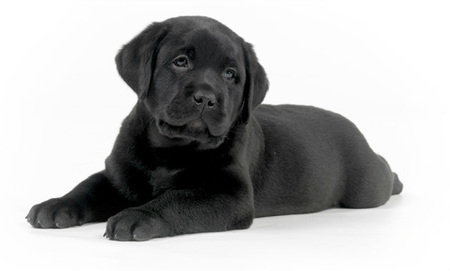 Aubigny-sur-Nère is a perfect setting for the annual show with the immense gardens beside the château and the beautiful trees including the most amazing Sequoia. I also have the chance to have some long-term T.W. owners who have a house and big garden just 20 minutes away. They also have Missy (Got The Look) and Priska (Prime time, sister to Poffy) and have the courage to invite me to stay however many dogs I have in tow. Which makes it a lot more fun than being in a hotel. Add their daughter, son in law and grandchildren (Emma and Paul) and we became a joyous band . . . with a total of 8 dogs running free. 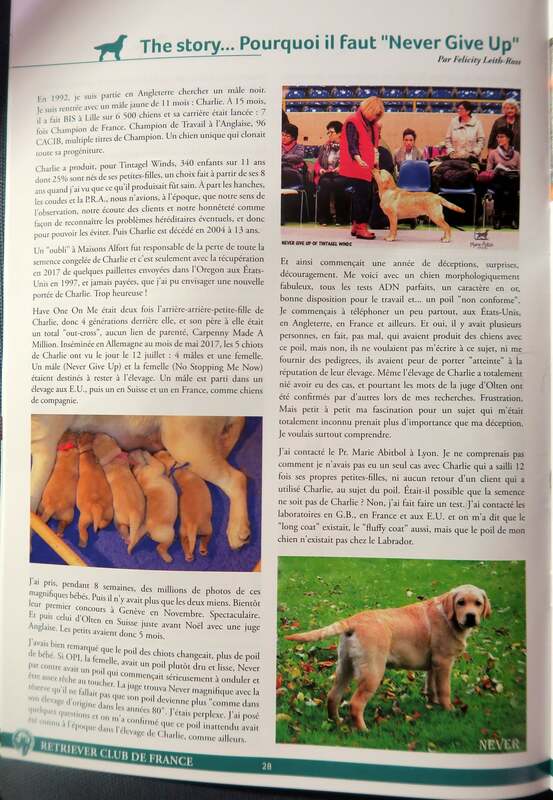 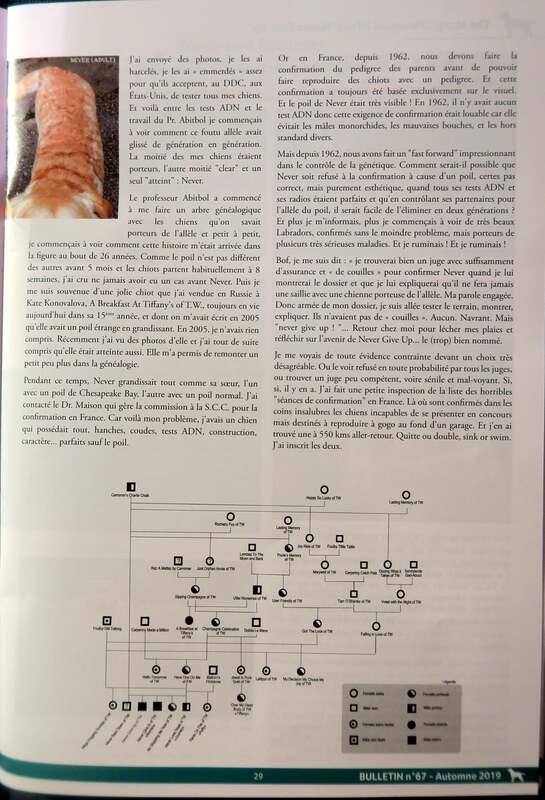 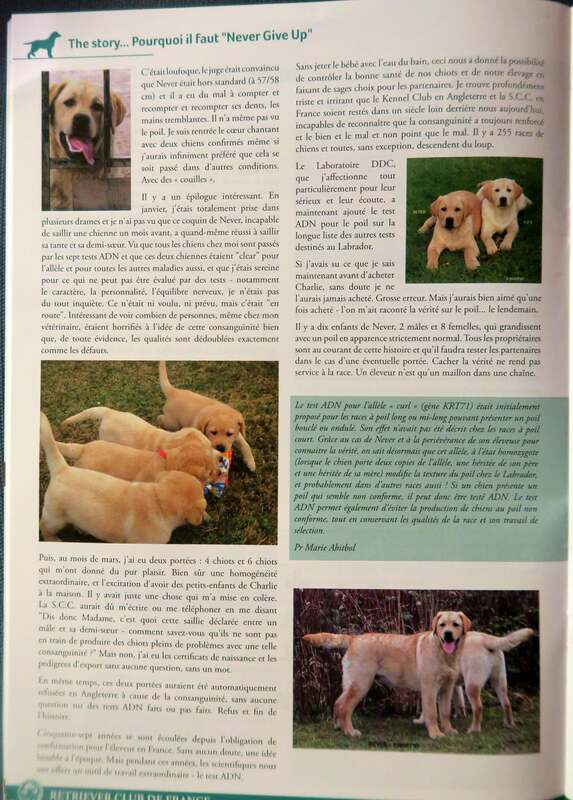 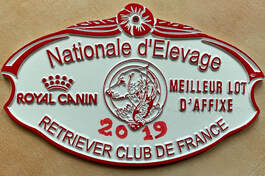 07/09/2019 - 39e Nationale d’Elevage du Retriever Club de France
To cut a long day short - Poffy took 2nd Very Promising in Puppy Bitch, Tiffany took 2nd Excellent in Junior Bitch, Jewel took 3rd Excellent in a strong (33 bitches) Open class, and behind her Yala took 4th place. O.P.I. made the first cut and left with an excellent, Joy got an excellent too, Meg decided she didn't like the judge and got a V.G. Missy took 4th place excellent in Veteran Bitch presented by Emma,

A bit sad that most of the commentary slips for each dog are incomprehensible with words missing or making no sense - the Bitch secretary obviously had poorer English than the Dog secretary. I got a reminder of a comment made to me by Bridget Docking, way back 40+ years ago, when I read the presentation made by the judges in the catalogue and then saw the results. She had said to me "You don't ever show your dogs to a juge who has either bought a dog from you or sold a dog to you". Apparently these days this is no longer part of show ethics.
The Breeder's groups judging at the end of the day was one of the prime reasons to be there and with a group of five and another group of three T.W.L. was well represented. I let Nicky hold 2 of the yellows, François took on 2 others and Emma showed Missy, who now belongs to her grandparents since Christmas. I had the 3 blacks. There were, I think, five other groups. The T.W. Yellows took the prize. It still amazes me that the most important show in France of the year gets only 153 Labrador entries these days when 7,000+ Labradors were registered last year, of which I bred just THIRTEEN, how come I had 11 T.W.s there ? Are most of these 7,000 dogs from puppy farms ? 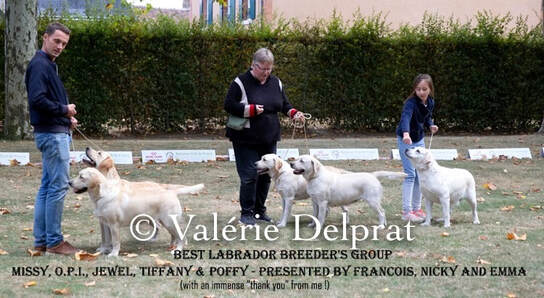 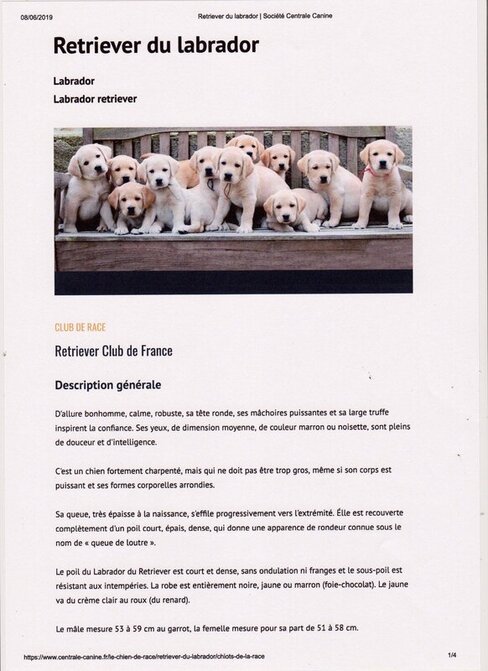 I suppose I should feel flattered (and I do, as I'm not a professional photographer) but I'm slightly shocked and surprised that the French Kennel Club (S.C.C.) pinched one of my bench photos to illustrate the breed on their web-site without either asking my permission or even letting me know.
-----------------------------------------------------------------------------------------
1+2 July 2019 - CHAMPIONNAT DE FRANCE .
Day 1 we had a French judge and very few Labradors.
Poffy - 1st Very Promising (and all alone) in Baby
Tiffany - 2nd Excellent in Junior
O.P.I. - 1st Excellent in Intermediate
Joy - 3rd Excellent in Open (handled by Marcelle Blondel  ❤️)
Yala - 2nd Excellent in Open
Note : mucked up Joy's results by the ring secretary and thus I have to send her card to the S.C.C. once I get my car and contents back.
Photos below of day 2 judged by a Belgian who judges all 10 groups and all breeds. That says it all. I might make no comment about this but I shall. This type of judge is mainly a political judge and generally doesn't bother with the notion of type. How could they when there are around 250 breeds ? This was the case, sadly. Presentation, teeth and movement are winning factors and if the dog or bitch just happens to have very good type as well - so much the better. And this put Woefdram's Abercrombie exactly where he belonged : the big winner and fully justified, I have witnessed this so often over my 41 years of showing and in the old days avoided this type of judge. Today you can't, they're all over the place. But how much I love a judge like Gwen Broadley was, or like Frank Kane who sees the dog and his qualities and faults however well or badly he/she is presented, and who recognises good type or absence thereof.
Poffy - 1st V.P
Pearl - 2nd V.P.
Tiffany - Excellent N.C.
O.P.I. - 3rd Excellent
Joy - Excellent N.C.
Yala - 3rd Excellent
Muse - Very Good
The show venue was poor and with defective air conditioning and at 35°C it was hard-going for both humans and dogs. Above all for the dogs. The second day I was accompanied by Katia, Jean-François (NOT happy 🤭), Julie and Sam + Muse and Pearl (respectively Yala's sister and Poffy's sister). So it was more fun for me too. Though the show was a mess, as usual.
The SEVEN bitches had a ball together and when asked what part of the week-end, the day(s) or the trip they most preferred; they unanimously replied that it was the evenings playing in the garden together as the sun fell out of the sky, and we sat and drank G&T, Champagne and wine, ate dinner al fresco with the dogs running round us and O.P.I. snatched an entire cheese off the table and ate it ! 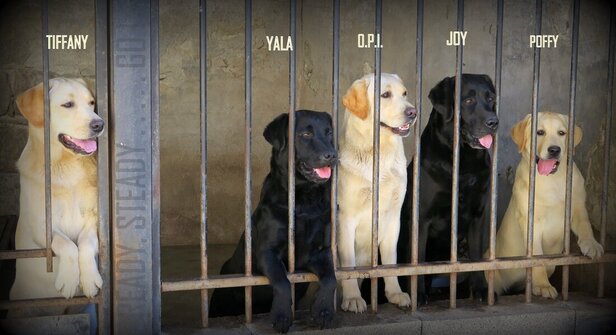 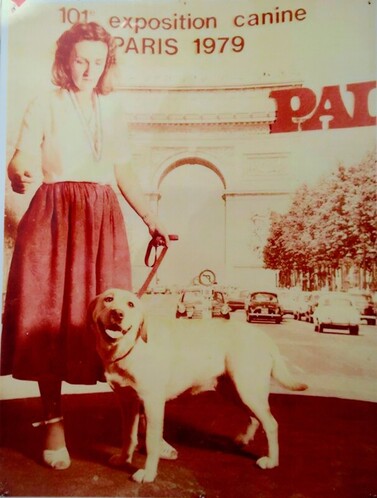 20/05/2019
FORTY YEARS AGO Ballyduff Sunflower (with my help) took the tickets and B.O.B. at the French K.C. Championship Show in Paris under Mary Roslin-Williams. At the time, in France, Labradors were almost entirely unknown to the French public. They were a shooting dog. There were 78 entries from 7 different countries.

I watched the Labrador become a popular breed with 300 and more entries, reaching N°2 behind the German Shepherd. Then the fickle French, always avid for something new and different (show them a photo of a purple dachshund with orange spots and that's what they'll be looking for) then switched to Golden Retrievers, Pit-bulls and other bullies . . . so that gradually the Labrador dropped to N°6, then N°13 and then N°23.

So we don't get specialist judges anymore, or rarely, and the less the judge is appreciated, the fewer entries in a descending spiral, quite out of control. Add to this the breeders, more interested in making money, selling studwork and selling puppies and winning small shows with dogs who scarcely represent the standard and you might as well stay at home and cry your eyes out for a breed to which you have dedicated your entire life and which is, literally, "going to the dogs".

But no, this year I will be at the show in Paris to celebrate 38 K.C. shows in 40 years (just two missed). A 2-day event with a CAC on the saturday and CAC/CACIB on the sunday. I have yet to find someone to move the FIVE bitches I have entered.

Yesterday evening I found the statistics. I'm still in shock today.
Incredulous I saw that on saturday there will be a total of 17 Labradors - 3 dogs and 14 bitches. On sunday, which qualifies for Crufts, there is a total of 57 Labradors with 19 dogs and 38 bitches (of which 7 Tintagel Winds). It's hard to believe that all those people producing the 7,500 pedigree Labradors each year can't find the time to come and present what they are producing. Maybe they don't care about breeding to the standard. Maybe they're not proud of their work. Maybe as they know they won't win, they see no point in going. But the main reason to go is to see what's happening in our breed.
Over the last six years (since my terrible cancer operations and the lasting fall-out) - I have produced between 13 and 20 puppies a year while caring for around 14 adults.
20 puppies a year out of roughly 7,500 declared pedigree Labradors born in France. That's a tiny insignificant percentage.

Thousands of visitors, loads of children asking questions and having a ball stroking the dogs.
A special "thank you" to Muse, whom I borrowed to make the quota of Chatterbox daughters required, had never set foot in a ring or a show either. The blind leading the blind so to speak ! So it was somewhat chaotic . . . but fun. 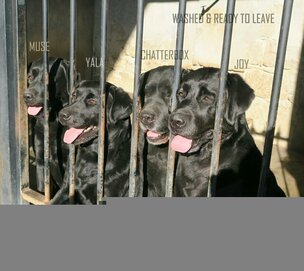 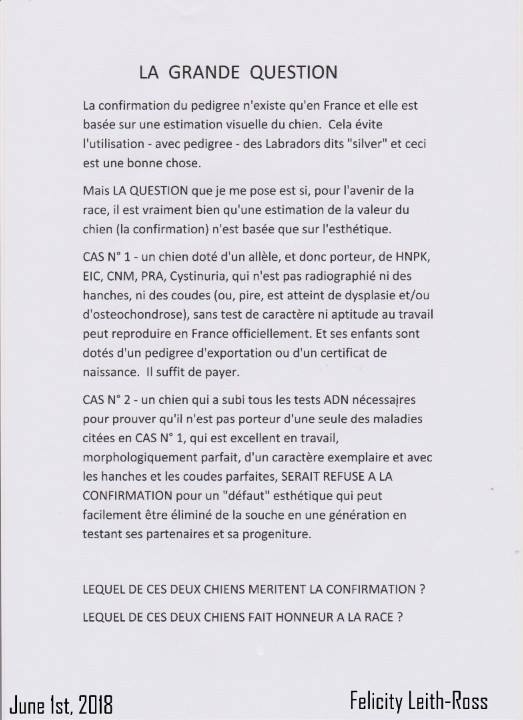 37 YEARS OF PRESENTING DOGS AT THE NATIONALE D'ELEVAGE
14/09/2017​
My 37th Nationale d'Elevage with the joy of getting what I was hoping for - the Producer's Group with Foulby Still Talking
Chatterbox (Foulby Still Talking) with his six daughters out of five different bitches.

Ch.FCS, Ch.CH Trialer FALLING IN LOVE OF TINTAGEL WINDS was placed 2nd in the 8th Group.

The 1st place on the podium in the Breeders' Groups went to TINTAGEL WINDS.  It was well worth the two nights without sleep driving up to Paris and then back home again.  Sometimes one walks on air, sometimes one drives on air - but driving on air cost me two points off my license and two fines. The "cruise control" is now something I'm going to use ! 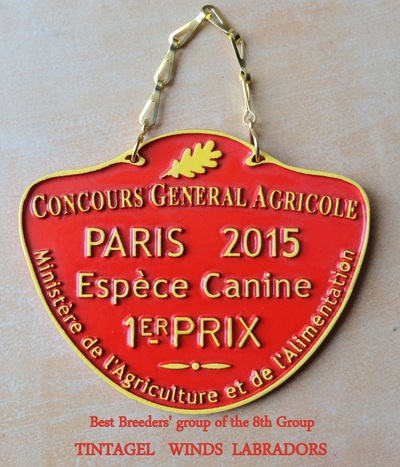 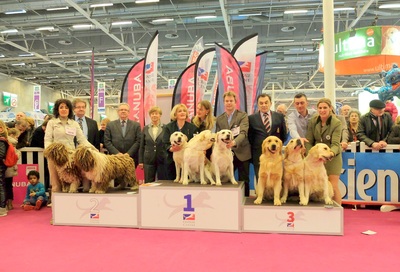 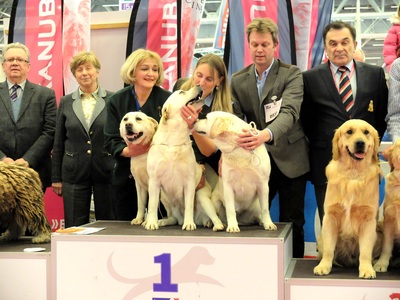 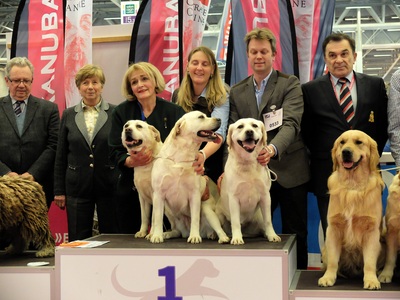 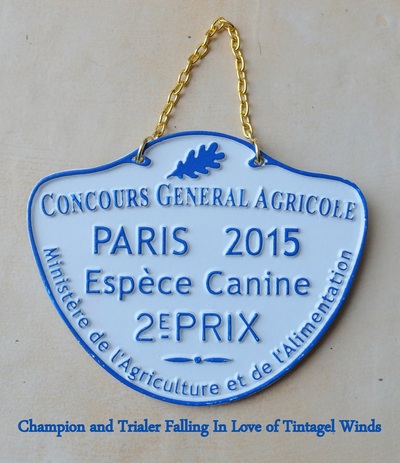 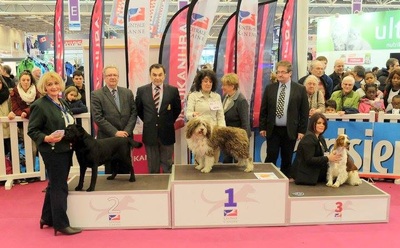 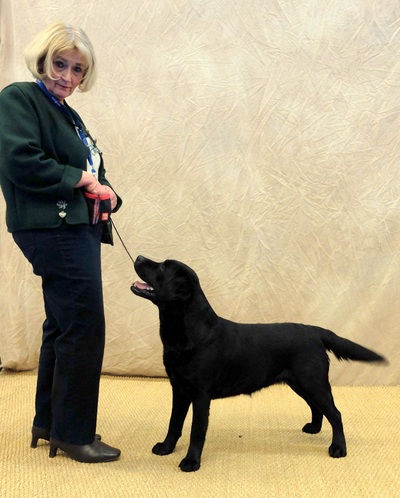 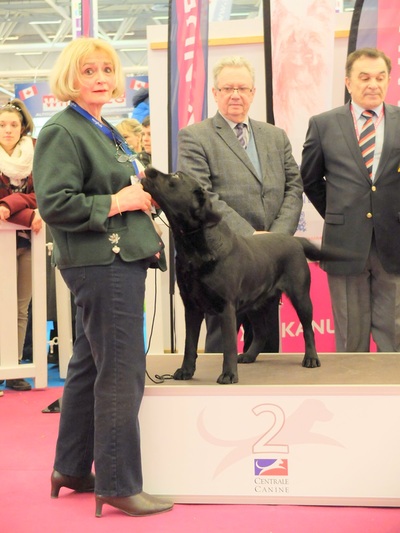 NEXT STOP : CRUFTS at the N.E.C. in Birmingham.  2,500 kms round trip but no more night driving "hell for leather" as heretofore.  Joined in Calais by Claude & Isabelle Céby with TINTAGEL WINDS XANDER who qualified for Crufts at the French K.C. show last June.  His 8th birthday was the day after Crufts so he was entered first in Veteran Dog and also in Open Dog.

Ch.FCS, Ch.LU TINTAGEL WINDS XANDER won the Veteran Class and then went on to win the Open Class which meant he was in the final line-up of eleven unbeaten dogs (the winners of each class) at the end of the day.  AND XANDER TOOK THE DOG CC.  This was an amazing experience for his owners who bought him as a pet and initially had absolutely no idea of showing him.  They've done an incredible job over the last three years and a great deal of credit goes to them.  Also I firmly believe in my 38 years of breeding and the choosing of the right dog for the right bitch.  XANDER  goes back six generations directly to my original first black dog Ch.IB KUPROS LUCIFER, bought from Pete and Marion Hart in 1977.  And a large dollop of luck for breeding is not a scientific equation.
Ch.FCS, Ch.CH Trialer FALLING IN LOVE OF TINTAGEL WINDS  took VHC (5th place) in the Special Working Gundog Bitch class. 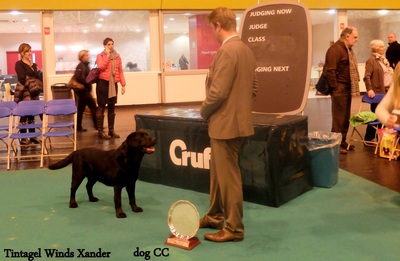 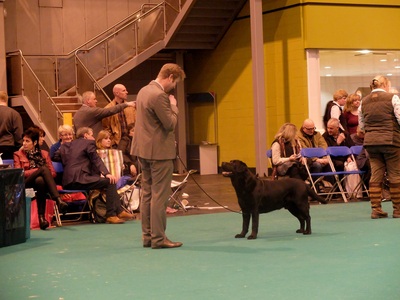 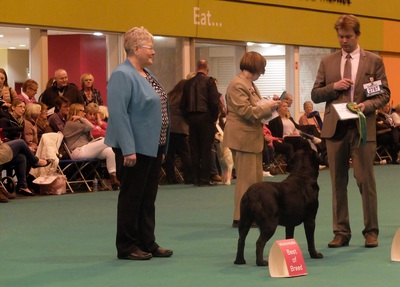 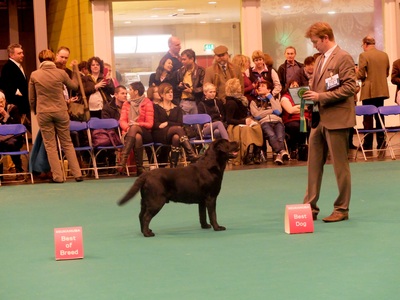 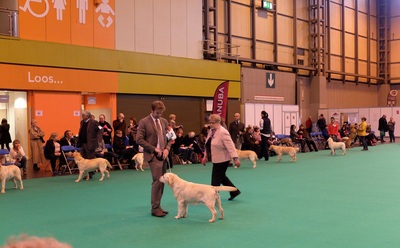 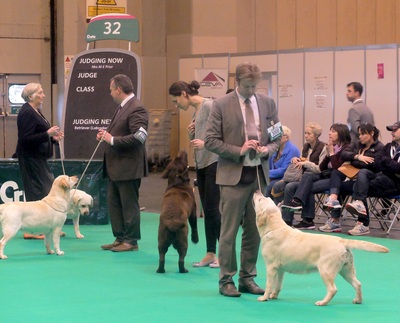 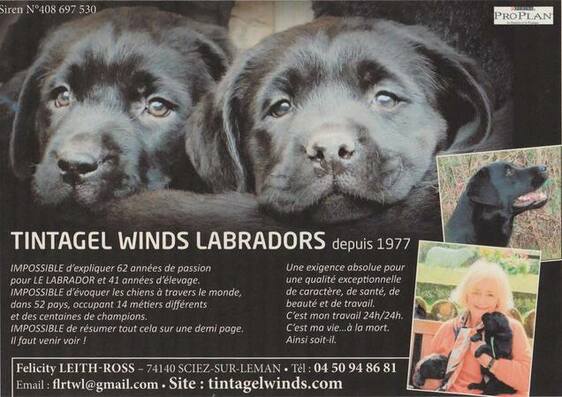