For the record :
Never Give Up Of Tintagel Winds (Never)
(Multi Champion And Field Trial Champion Carromer's Charlie Chalk X Have One Of Me Of Tintagel Winds)
Born July 12th 2017
Clear For The 3 DNA Tests For PRAprcd/EIC/HNPK 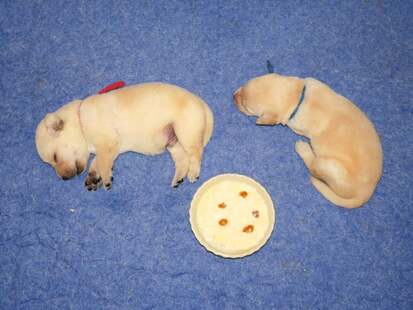 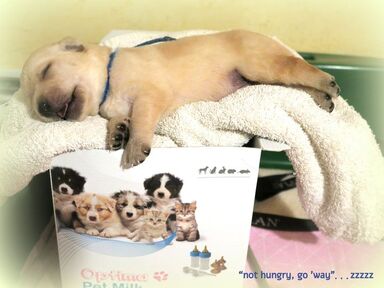 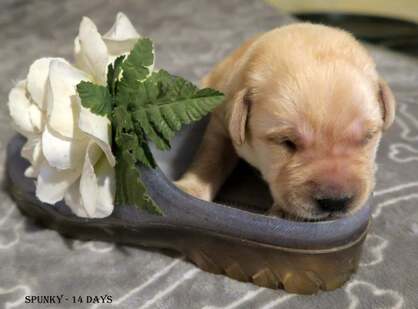 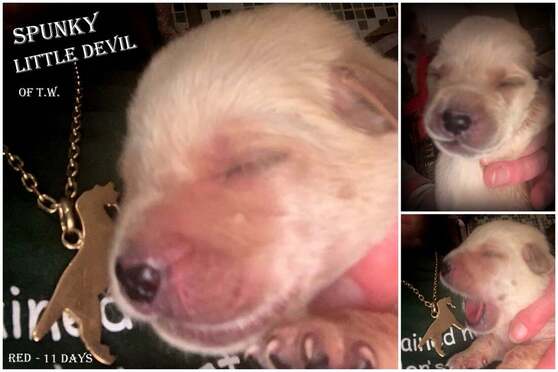 _____________________________________________________
​01/10/2021
8 Days
Everyone got clean pyjamas this morning. Throwing up milk non-stop and being licked (not quite to death) by their mother, Paws, sent the collars into unrecognizable colours. Which made the weighing precarious.
Red is still a very big worry but though I keep asking myself whether insisting on his living is doing him a favour - I shan't give up as long as he keeps trying to move forward. He still doesn't know how to suck though is attracted to the teats. It's becoming difficult when he weighs less than half what the biggest weigh. Punishment Box to the rescue !
Green was a big worry too but has discovered how to suck and is certainly/probably out of danger now at 9 days. Royal Blue is still a worry.
I'm cheating too, because the 4 being intubed . . . I only accept writing down their weight just after they've been "fed" and not before. This cheating boosts my morale as well as their weight.​
_____________________________________________________
​29/09/2021
6 Days
Never before have I had puppies probably "born" over a week early. By C-section because the uterus was open and there were no contractions. Unable to suck, unable to accept the gastric tube, unable to digest and despite a loving and ever-present mother - life was too fragile for four of them, though not necessarily the smallest at birth. Paws is being wonderful.
24 hours a day, non stop taking their temperatures which fall constantly without vigilant care, weighing them before intubing, weighing them after (because they throw back most of the milk), giving them Virbac Nutrition gel, cleaning them, loving them . . . for such a pathetic result.
Will I manage to save the seven who are still here ? I don't know. At one week old, normally a puppy doubles his birthweight - but they haven't in this case even though their birthweight was less than I have ever known, about half what is normal.
I'm totally undone, holding my dying babies against my skin and telling them I love them until I feel their last breath. I suffered this once in 1985 with my own baby and each time now this brings back terrible traumatic memories of an insufferable situation.
Just a million, million thanks to the very best friend in the world whose constant telephone calls at all hours of day and night are just about holding me together with comfort, advice and encouragement. Some exceptional humans go above and beyond.​
_____________________________________________________
​26/09/2021
3 Days
Eleven there were, nine there are and, hopefully, nine there will be . . . .
Two very difficult and sad days fighting the disaster which is a litter born five days early by C-section.
Two little girls went over the Rainbow Bridge and I howled my despair into the silent night while the full moon stared down at us. A moon that's watched everything in this world since the beginning of time doesn't think much of two puppies dying. Neither Orange nor Pale Pink responded to gastric intubing nor bottle feeding nor drop by drop syringe feeding. They crept out of this sad world and though Paws seemed indifferent (dogs are wonderful, they never look back) I wept the whole night for them.
The 9 others are in two groups, though all together - 4 are being intubed every four hours, 4 are doing fine all by themselves and one is half way between. There's a considerable weight difference and nothing is still sure but I feel more confident today that these nine tough little ones will thrive and shine. Paws is being a really wonderful first-time mother though she was not well for two days. 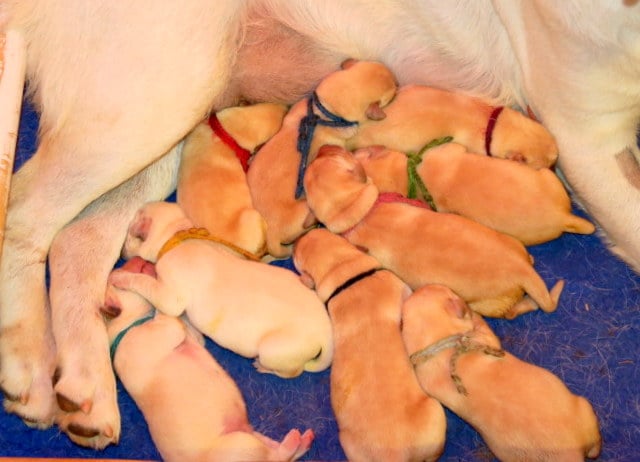 I took it as fun and games when I saw Never on her back. She'd been in season just 4 months earlier and was losing nothing and he's always adored pale yellow girls.

However, just about on 5 weeks today since I saw the "fun and games" and her attitude has changed and so has her underbody line. Looks like I'm faced with the evidence of misbehaviour ! 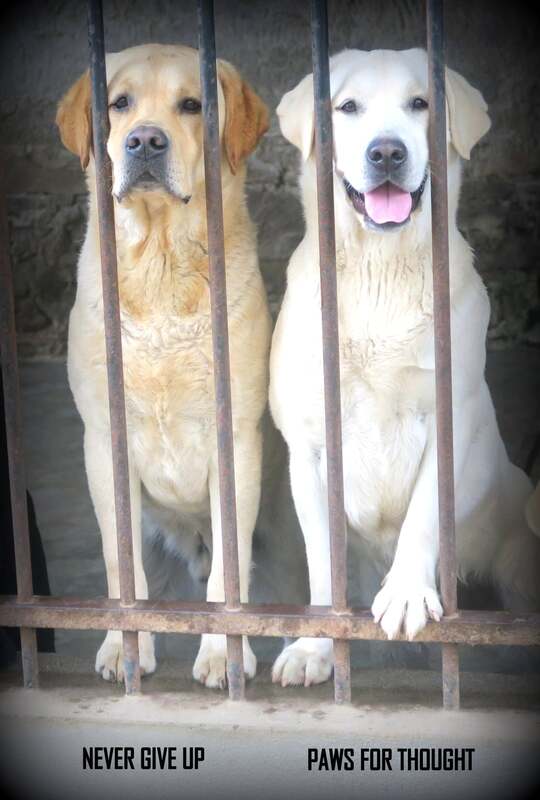